Public funding from voter-approved state bonds Proposition 84 and Proposition 1, are being combined with $17 million of Proposition 13 funds from the Department of Water Resources’ Riverine Stewardship Program, to fund construction of the new $40 million Salmon Conservation and Research Facility (SCARF). The SCARF, owned and operated by the California Department of Fish & Wildlife (CDFW) and located about 1-mile downstream of Friant Dam, will be capable of producing approximately 1 million juveniles annually to assist with the reintroduction of a threatened spring-run Chinook salmon population. Fish releases from the SCARF will be combined with other restoration actions to, “restore and maintain fish populations in ‘good condition’ in the mainstem of the San Joaquin River below Friant Dam to the confluence of the Merced River, including naturally reproducing and self-sustaining populations of salmon and other fish” (Paragraph 2 of the Stipulation of Settlement in NRDC, et. al. v. Kirk Rodgers, et. al.).

Less than 3,000 eggs or juveniles will be transferred to the SCARF each year from northern California streams where spring-run Chinook exist. CDFW will raise fish which have the least amount of genetic similarity, thus producing a genetically diverse population of the juveniles for release in the San Joaquin River.

As part of its contribution to the project, Reclamation funded the $1.3 million construction of a new water supply line for the SCARF. The project consisted of 350-feet of 24-inch diameter water line capable of increasing water deliveries from 35 cfs to 55 cfs. Construction was completed in summer 2017.

To view the Environmental Assessment and associated environmental documents for this project, go here. 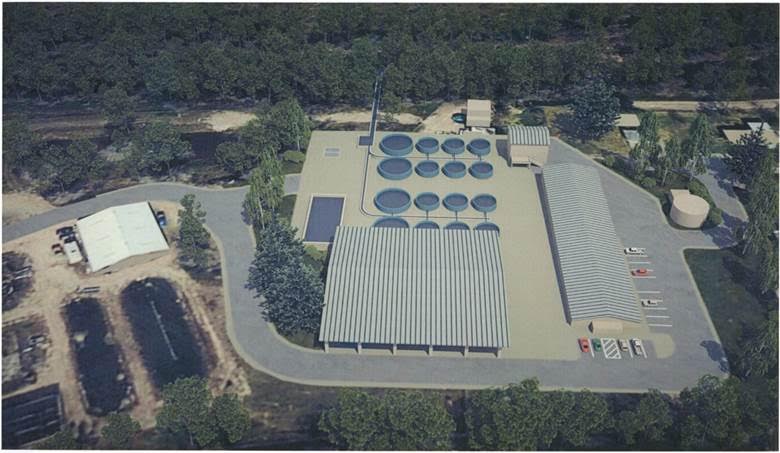 A rendering of the SCARF at completion.