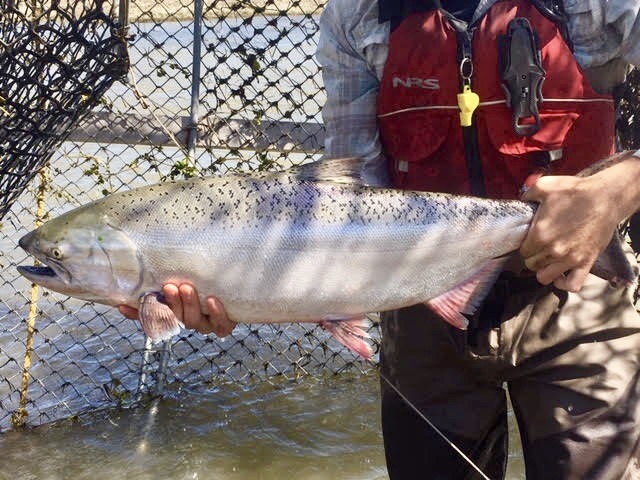 For the first time in over 65 years, threatened Central Valley spring-run Chinook adult salmon have completed their life cycle and returned to the Restoration Area. While spring-run have been placed as adults in the river previously, this is the first time Program fish have migrated out of the system as juveniles and returned as adults years later.

A total of 23 returning adult spring-run Chinook were trapped in fyke nets (fyke net install) in the lower Restoration Area. The fish were able to outmaneuver predators and avoid the perils of modern water infrastructure before making their way nearly 370 miles out to the Pacific Ocean to mature for 2-5 years before returning to the San Joaquin River.

“This is monumental for the Program,” said Program Manager, Donald Portz. “It’s a clear indication of the possibility for these fish to make it out of the system as juveniles and then return as adults in order to spawn,” he said.

The first fish was caught April 9 and viable fish were released in Reach 1 after fin and tissue samples were collected for identification purposes. In addition, an acoustic tag was inserted esophageally to allow scientists to track the fish movements using acoustic arrays in the river before release into Reach 1 of the river.

Fish were captured throughout the months of April and May with monitoring efforts curtailed at the end of May.

Biologists knew from the onset that the fish came from a California hatchery as the adipose fins — a small fin on fish backs — were removed (the primary way to demarcate hatchery stock from wild fish). All the captured fish also had a coded wire tag embedded in their snouts. Because several fish captured perished prior to release, scientists were able to recover the coded wire tag and verify  the fish were some of 38,106 juvenile spring-run released in the San Joaquin River in March 2017.

Further tissue sampling will determine if any of the fish were spawned at the State of California’s Interim Salmon Conservation and Research Facility (iSCARF) on the banks of the San Joaquin River below Friant Dam. While the Program is now producing its own broodstock specific to the San Joaquin River, when the Program’s fish reintroduction effort began in 2014, fertilized spring-run Chinook stock eggs were transported from the Feather River hatchery to the iSCARF. There, the eggs were allowed to mature into juveniles (about 6 months) before being released to the Restoration Area.

While at one time spring-run Chinook salmon were the dominant run of salmon in the San Joaquin River and the southernmost population of Chinook in California, the completion of Friant Dam in 1942 cut-off the historic spawning habitat for spring-run and the species extirpated from the system.

Currently, there are other human-made fish barriers in the San Joaquin River mainstem and in the lower Eastside Bypass that hinder anadromous fish from reaching spawning areas below Friant Dam. As a result, recently caught spring-run have to be transported via a 500 gallon fish transport tank and released above the barriers in order to provide access to habitat.

“The Program is working diligently to create a connected river that allows for in-river flows and volitional passage for these fish,” said Portz. Those efforts include removing or modifying existing barriers to allow fish access to and from the river’s upper reaches.

Spring-run Chinook are named for the timing of their return to (and exodus from) the system where they were spawned during March through June. As adults, they hold in the cool upper reaches of the river through the summer before continuing their life cycle and spawning in mid-September through early November. Following emergence from eggs and growth through the parr stage, juveniles migrate either out to the ocean or remain in the river for another year before migrating to the ocean where they mature to adulthood for 2-5 years before they make the trek back to their natal stream.

For more information about the capture or the Program, please contact SJRRP Public Affairs Specialist, Josh Newcom, at (916) 978-5508 or via e-mail at snewcom@usbr.gov

Read the National Oceanic and Atmospheric Administration story about the returns in the San Joaquin River AND Battle Creek here!

Read the Fresno Bee story about the spring-run return to the San Joaquin River here!